Stop-motion animation isn’t just for old Christmas specials. Many of the movies and shows your kid enjoys today are made with stop-motion techniques. And these techniques are easy enough that even a kid can make short stop-motion movies with the right equipment. This list will help you select the best stopmotion animation kit for your budding moviemaker.

How to Pick the Best Animation kits for kids

Even with the best kit, making stop-motion animation is a painstaking process that requires patience. It’s unlikely that younger children will have the attention span to stick with it, so make sure you buy a kit that matches your kid’s age.

Some of these kits include figures, props, backgrounds, and other toys your kid can use in his or her movie-making. Others are just software, a camera, and/or instructions on how to do stop-motion animation. Having additional props can make it easier to just jump into movie-making, and they still have toy value even if your kid gets bored with stop-motion. But they also tend to cost more.

Most of these sets are designed to allow your kid to film with a phone or tablet camera. However, not all of them include apps that can be used to capture stop motion, so it’s up to you to provide your own. While having an app supplied takes some work out of the process, there are many excellent animation apps available for every OS, and if the kit uses a proprietary app it can be annoying if the manufacturer stops supporting it. Note that in the case of kits that provide software licenses, these usually cover only one installation of the software; if you plan to install the software on multiple devices, that will mean paying more.

Some of these sets include a camera, while others require you to provide your own, either a webcam or a phone/tablet camera. While having a separate camera does make it easier to film, it also adds to the cost of the kit, and most cameras require a laptop or desktop to work. Even if the set doesn’t include a camera, a good webcam shouldn’t run you more than $20-$30.

If the stop-motion animation set does include software or an app, it’s naturally important to ensure that it works with your hardware.

The Stopmotion Animation Software includes a CD of proprietary animation software (which can also be downloaded online), a 1080p HD camera with mic and USB 2.0 connection, and a nearly 300-page guide to making stop-motion animation and special effects. Having separate camera can make focusing and framing shots much easier than having to depend on a phone camera. The book is extremely detailed and helpful as well, with links to video tutorials online for further instructions.

The flexible gooseneck 720p camera that comes with the Hue Animation Studio set is the best designed on this list, making it a snap to get exactly the angle you want for each shot. It’s accompanied by a CD of animation software (can also be downloaded), a USB cable for connecting the camera to your computer or laptop — once again, tablet and phone users are out of luck — and a 60-page guidebook that includes steps for creating 20 different videos. The quality of the camera you get with this makes it our Upgrade Choice.

Klutz has been a leading name in how-to kits for kids (and adults) since the 70s, and of course LEGO needs no introduction to the average parent. Between the two of them, they’ve produced an excellent introductory set, the Klutz Lego Make Your Movie, that includes 36 minifigure and prop pieces and six cardboard backgrounds for movie sets. Also provided is a simple guide that can walk your kid through making 10 short movies. The amount of stuff you get for a relatively low price makes this our best budget buy.

Serious Minecrafters probably already enjoy building and making animations in the virtual world, so it’s only a short step from there to movie-making in the real world. Using the included phone and tablet holder and a free downloadable app of the Mattel Minecraft Stop Motion, kids can set up their own (block-based, of course) sets and lead the included mini-figures through movie adventures.

The Zu3 Animation Software Handbook is popular in schools for its simple, kid-friendly software interface and the flexibility of its inputs, which can be used with either a phone or tablet or via wireless camera. So if your kid is already familiar with this setup at school, getting it at home is a no-brainer. Despite the simplicity, the software can do some remarkably powerful movie-making tricks. The included Animation Handbook will help your kid design characters and start animating simple movies.

If your kid is a fan of Emmet, Lucy, and the rest of the LEGO Movie crew, the The LEGO Movie 2 Movie Maker may be the way to get them interested in animation. It’s definitely one of the most generous sets on this list in terms of props, including figures of several movie characters and 482 LEGO pieces that can be used to build vehicles and objects from the movies. The stage set also includes sliders that make it easy to move figures in between shots.

The Klutz Book of Animation

Another offering from the klutzes at Klutz, “The Klutz Book of Animation“, this one is even more bare-bones: you get an animation guidebook and a glob of clay, and the camera, software, and other props are yours to supply. While the technical side of things is a bit dated already, the animation principles are presented in a clear, funny way that should help boost your kid’s imagination and get him or her working. 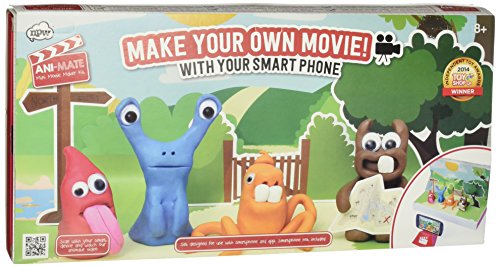 Lights, camera, action! This miniature NPW ANI-Mate Kit comes with everything your budding director needs to create their very own stop-motion film. There are four studio backdrops, an assortment of pint-sized movie props, and a durable plastic phone stand. High-quality modeling clay and googly eyes are provided so you can create characters.

This hands-on educational activity makes it possible for your child to share their creative skills in a new and exciting way. While there are only enough supplies for one or two mini movies, you can find the consumables at most arts and crafts stores.

The Zing Stikbot Studio Pro is a small and inexpensive set that lets your kid make movies using the two included Stikbots — small poseable plastic figures whose suction-cup hands and feet make them easy to pose for stop-motion shots. Includes download instructions for a simple phone app and a tripod to turn your phone into a movie camera.

You may have noticed that many stop-motion animation sets don’t include basic stuff like cameras or software. That’s because, to let you in on a dirty little secret, you don’t need the best stopmotion animation kit to get started, or even any kit at all. There are many excellent free, or cheap, stop-motion video apps available, and text or video tutorials that will show your kid how it’s done.

For Android or iOS devices, Stop Motion Studio is a good starter — the basic app is free, and you can get fancier editing tools as a one-time purchase.

Gary is a father of two, self-identified RC fanboy, and part-time guitar plucker. When he's not racing his collection of remote-controlled vehicles or strumming away, we bend his arm and get him to write with precision and expertise on a range of mechanical and electrical toys.

The 10 Best iPad Cases for Kids

The 9 Best Tablets For Kids

Toys for kid’s with ADHD

The Best Robot Kits for Kids